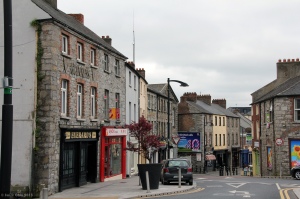 The town of Navan is in County Meath, about an hour northwest of Dublin. Founded by Normans,  it is one of very few towns in the world whose name is a palindrome. The word itself probably originated in the Irish word, Uamhain, which means “cave.”

The surname Navan has a different origin. There are several alternate spellings of the name, among them are Naven, Nevin, and Navin. Navan may be a form of the Gaelic word, Naoimhin, which means, Little Saint, a term that was used often as at baptisms as a name of affection. I can never think about its meaning, Little Saint, without thinking about my father-in-law, who bore the surname and who was one – a little saint. A small man and Irish through and through, it is impossible to imagine that he ever had an enemy. Always quick with a smile and a kind word, we had a special bond because we were both readers. We shared ideas we came across and he seemed to delight in our conversations. I believe I was one of the few individuals in his life who shared his thirst for knowledge.

My father-in-law’s life had a great influence on how I interact with elders in my visits to residential facilities. As a boy and young man, he was fascinated with aviation, which was in its earlier years of development in pre-1920 years of his boyhood. He was so passionate about the field that as a young man, he built a scale model of the Spirit of St. Louis after Lindbergh’s flight. It was entered in a contest and consequently he won a college scholarship, which he had to turn down because his parents insisted he stay home to work the farm.

How many of the gifted elders that we know and interact with had similar roadblocks in their lives? How many now are languishing in residential care, with no stimulation or opportunities to engage intellectually with peers that share their passions? What can we do as a society to differentiate care for our gifted elders?

This post is part of the Blogging from A to Z (2016)  Challenge. Click here. to see all of the blogs in the A to Z Challenge